What is an SSD?

What is an SSD? – Solid State Drives

In simple terms, old HDD’s had platters, similar to a CD or DVD. The platter spun around in the HDD case. There would then be a head that read the data from the surface of the platter, similar to the laser in a CD player. Although the platters in a HDD are magnetic.

The problem with these HDD’s is that if the head, arm, platter is damaged then the data could be lost for good. (Data recovery can cost thousands this is why we suggest a backup and then backup that backup!) Think of driving a car along the road, the wheel is in motion and then you hit a curb, you could damage any number of suspension components. If you drop your laptop, while it’s on especially and the hard drive head goes into the platter and damages the platter. That part of the disk could be faulty.
Also, because of the constant moving parts this can slow down over time.

Think of a USB memory stick, it has no moving parts and has simply a chip inside that holds your data. This is the same premise for SSD’s they are just chips, working on similar tech to that in a USB memory stick. Because they have no moving parts the memory can be accessed very, very quickly as there is no spinning platter to take 1 read from. Just a memory address. 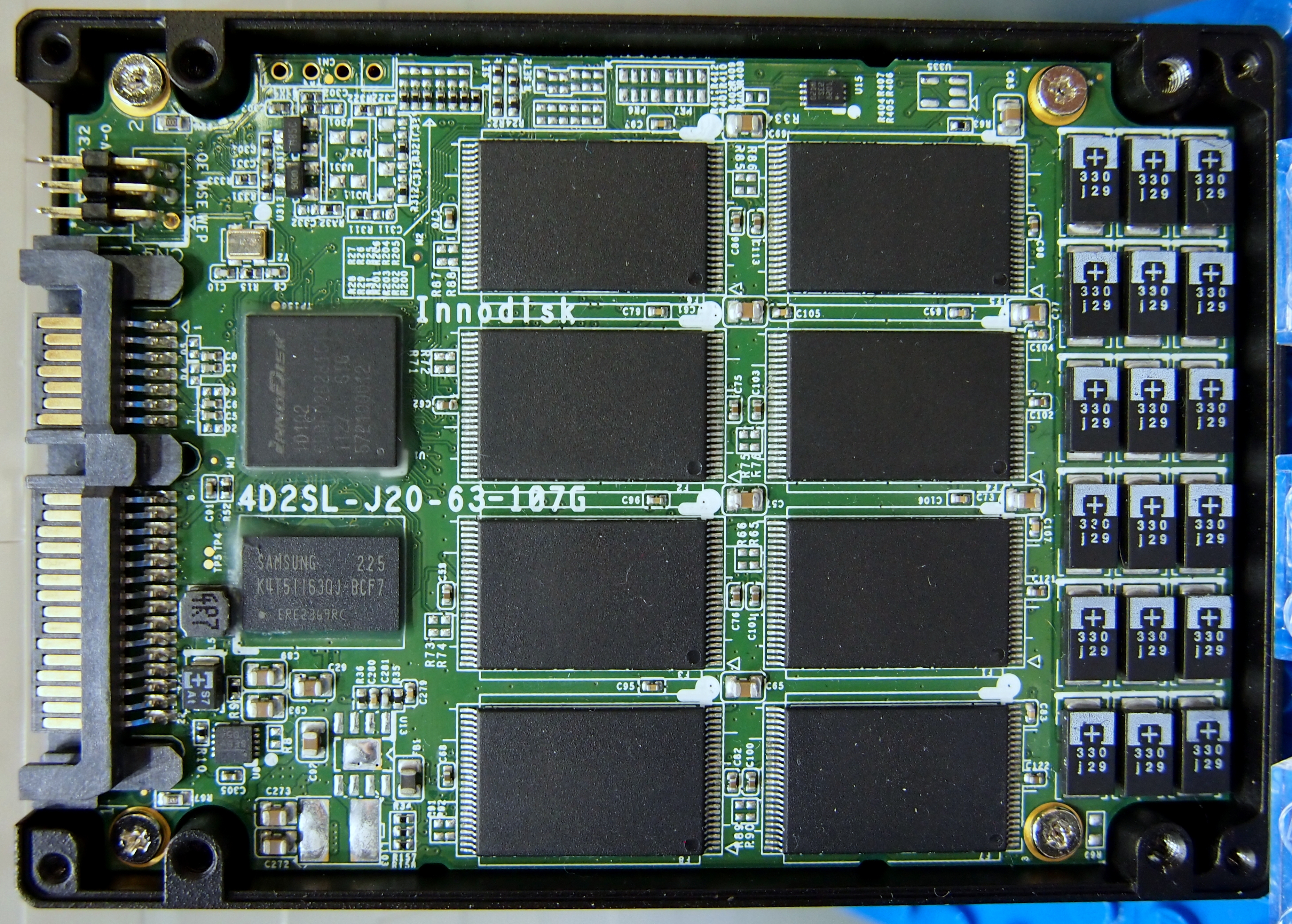 To the right is a SSD with the cover taken off, as you can see, very different from that of a mechanical drive. This drive has a load of microchips which store the data.

SSD’s take less power than their mechanical brothers as there is no moving parts so I have seen operations on battery being longer in laptops being increased when upgrading customers. It really depends on the laptop to how much an extent, but I’ve seen a 20 minute battery operation improvement and also double improvement.

If you’re in or around Newcastle upon Tyne we can perform a SSD upgrade for you. Give us a call or email to discuss 0191 500 8640 or sales(@)thecomputersaint.com (take the ( and ) out of the email address to send us an email)

Certainly, in the world of home computing 15TB is a bloody lot of data storage. For a business, not so much. But in a SAN along with 10 more of these you’ve got yourself some very fast storage for a small business. I think I would have a mechanical array that is of the same size (in TB) so I can back the SSD back to a mech drive. Not that I don’t trust the SSD, far from it, my main machine has 2 of them. Backup data is a must.

From the news release:

The unprecedented 15.36TB of data storage on a single SSD is enabled by combining 512 of Samsung’s 256Gb V-NAND memory chips. The 256Gb dies are stacked in 16 layers to form a single 512GB package, with a total of 32 NAND flash packages in the 15.36TB drive. Utilizing Samsung’s 3rd generation, 256-gigabit (Gb) V-NAND technology which stacks cell-arrays in 48 layers, the PM1633a line-up provides significant performance and reliability upgrades from its predecessor, the PM1633, which used Samsung’s 2nd generation, 32-layer, 128Gb V-NAND memory.

Impressive tech! It’ll be great to see this in a commercial setting.